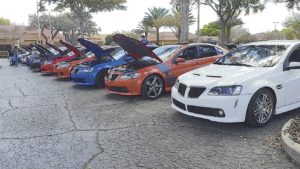 The True Value of Stewardship…

Sometimes, I feel like I am in a soundproof room screaming at the top of my lungs. I have spent the last 20-plus years trying to expand the hobby by welcoming the next generation to the fold. It has been a tough sell for a lot of reasons, though I think that the gravity of the situation is starting to sink in for a lot of people.

I became much more aware of the potential of the Millennial Generation after I made a Millennial of my own. My son Rob was born in September of 1995, and within a few short years it became quite obvious that this generation was going to be large and have a lot of buying power.

According to an article published in April of 2016 by the Pew Research Center, a non-partisan think tank based in Washington, D.C., the Millennial Generation is now the largest living segment of the U.S. population, with 75.4-million people, surpassing the Baby Boomers’ 74.9 million. Obviously, the total number of births between 1946 and 1964 was higher but those total numbers are beginning to dwindle. Additionally, the total number of Millennials is still climbing, with immigration levels at an all-time high, expecting to peak at 81.1 million people by 2036. That is a lot of people and a lot of potential customers.

Whether all of the bad press that the Millennial Generation has received thus far is justified or not is open to debate, the facts are that they comprise almost the entire 17-34 age demographic and their dollars are the most sought after by retailers. Market researchers were gearing up for their market demands since they were in diapers.

Why aren’t we- as automotive hobbyists in general and Pontiac hobbyists specifically- aiming our sights at them? Even if a small fraction of 1% could be enticed to join our ranks, there would be zero need to worry about the future of the hobby. Yet, for the most part, we complain about “those damn kids” without trying to understand who they are, what their interests are and that with some proper stewardship, we could easily make them the very worthy heirs to the legacies that we are so enamored with.

As far as I am concerned, the national clubs as a whole don’t get it and some don’t want to. While they are wasting their time trying to entice “older guys who aren’t in the club” (aka guys who swore them off 20 years ago), they are completely ignoring their own mortality as organizations and driving them full speed into the abyss. This is exactly not the way to do it. How many times have you heard something to the effect of, “We need to bring in the young people but we don’t want to change anything.” Sure, that is working so well already.

Typically, when younger enthusiasts are discouraged from participating at an event, it usually boils down to two things. It is either fear of young people or it’s their car. While it is technically allowed and is technically a Pontiac, it might be a front-driver or has a corporate engine. The purists either put it in the back of the show so no can see it or they simply turn it away altogether. I have actually heard people saying, “We don’t want those kinds of cars at our event.” Yeah, you showed them all right- just don’t complain about how your show size keeps getting smaller every year. If you’re looking for answers, the mirror is a good place to start.

On the flip side, the younger people are going back to their friends and saying how poorly they were treated by the event organizers. Most of their peers give the standard “I told you so” response and those would-be members will never return. Don’t tell me it doesn’t happen, or they are isolated incidents- I know better.

Fortunately, I have seen some progress in three areas of the hobby, two national events and one local one that particularly impressed me. First and foremost, the Ames Performance Pontiac Tri-Power Nationals is the largest and most successful Pontiac event in the country and they do this by not turning people away. I know, it’s crazy but Pete and Andrea Woodruff of Super Duty Promotions, the owners of the event, have classes for any and all Pontiacs ever built and whether you have an original 1963 Super Duty Catalina, a GTO Judge, a race car or a clapped-out Grand Am with a pizza sign on the roof, you are welcomed and encouraged to participate in both the show and race programs. With car counts usually passing 1,000 cars, they have what it takes to keep the momentum going for many years to come.

Our hats are also off to the Trans Am Nationals in Dayton. These folks left all of the “no corporate nonsense” BS at the door and welcomed all Pontiac Firebirds regardless of year or powerplant. Right now, the second-generation cars are the most abundant, but if yours came with a 305 Chevy or 403 Olds, or whatever else, you are welcomed and treated like royalty regardless of whether your car is worth six figures or not.

Finally, I would like to take a moment to give a shout-out to the Widetrack Warriors car club from Orlando, Florida. You will see coverage of their annual event elsewhere in this issue but one point about them that I wanted to make here is that in the fall of 2016, they opened up their club to owners of other GM divisions. They now accept Buick, Cadillac, Olds, Saturn, GMC and even the stateside Holden derivatives, like the Chevy SS. They understood that their survival depended on opening up the membership to other GM cars, and interestingly the makeup of their events hasn’t really changed much but the membership numbers and the dues they generate are up. By remaining a primarily Pontiac-based organization, they can stay true to their mission, while casting a wider net with which to attract more would-be Pontiac fans.

I give the Widetrack Warriors a lot of credit for doing what they did- it definitely took some courage and I am sure there was some pushback. It may not be for every organization and it wouldn’t work for this magazine, but for them it is working. They are providing a realistic path to get at younger people and open up new opportunities to get these younger car guys and girls interested in the Pontiacs that we grew up with and love to this day. By being friendly and inclusive, everybody wins.

One thought on “The True Value of Your Stewardship …”