A few issues back, I wrote about the changing world of magazines and how the “new media” is replacing the written word with podcasts and video presentations of content becoming the preferred vehicles of getting the message out. While all of this turmoil has sidelined a lot of magazines we knew and loved (even Car Craft, of all things), not all of the changes have been bad.

We would be fools if we kept doing the same thing over and over, hoping for a different outcome. The times are forcing us to evolve. As a result, we now have a total of four platforms with which to bring the Pontiac message to you; Poncho Perfection, Tiger News, Tiger Talk- The Cruisin’ Tigers Pontiac Podcast and now the Poncho Perfection YouTube Channel.

We all know that Poncho Perfection is a traditional car magazine, focused on our favorite marque, with a group of seasoned professionals who understand the topic and present fetures, tech, historical pieces and event coverage better and with much more authority than anyone else out there.

Next up is Tiger News, the “house organ” of the Cruisin’ Tigers Pontiac Club. This publication is available as a digital download and is formatted like Poncho Perfection. The focus is more on club activities, member profiles, board actions, membership milestones and editorials from our president, as well as updates and previews of the annual “Cruisin’ Tigers Indian Uprising Weekend.” Like Poncho Perfection, Tiger News also features a model car column by our scale Pontiac guru Tim Sickle, a “Department X” feature and a classified ad section that mirrors Poncho Perfection. The two publications complement each other perfectly and offer an alternating focus on the activities of the club and the Pontiac world at large.

Never ones to rest on our laurels, the directors and officers of the Cruisin’ Tigers Pontiac Club and staff of Poncho Perfection are a team committed to moving the Pontiac hobby forward. As a result, we have developed two new platforms for getting the message out, each using the technology of the 21st Century, yet different enough where they will not be tripping over one another. 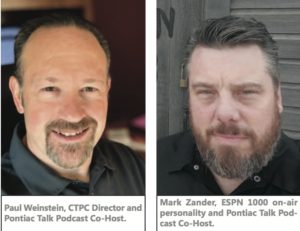 Last autumn, CTPC Director Paul Weinstein teamed up with Chicagoland radio veteran Mark Zander to produce Pontiac Talk, the Cruisin’ Tiger Podcast. This is a professionally-produced audio podcast that is sponsored by Ames Performance Engineering and Autosmart.
The podcast’s subject matter is presented in a traditional interview format—yours truly was the first guest and I was really impressed by just how well it went. It was kind of a weird setup, as they were in Illinois and I was actually down here in Florida in my car with my phone connected to the sound system by Bluetooth. It was as soundproof an environment as I could come up with and it worked pretty well. Mark and Paul did a fantastic job with the debut and honestly, it has gotten even better as they have become more familiar with each other and have settled into a nice groove. Mark is very skilled at not only guiding the interview but also extracting relevant and interesting information from their guests. Paul’s extensive knowledge of the Pontiac hobby and the state of the restoration industry has really dialed in the podcast and has been particularly helpful with interviews with Kevin Beal from Ames Performance Engineering and Brian Caldwell, from Autosmart. It’s a team that really benefits from each other’s input. The guests have run the gamut from industry insiders to hobbyists like Bill Nawrot to the people who help make the club run as well as it does, like President/Treasurer Randy Ray and Tech Advisor Coordinator Kyle Kruszewski. There are also some surprises in store that we are not going to spoil, so be sure to check it out. 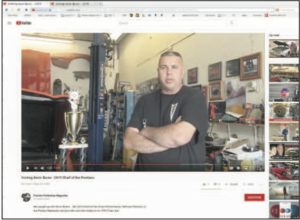 Shortly after the 2019 Ames Performance Pontiac Nationals, our ace phtographer Tony Webster contacted me about possibly extending our reach into the video realm in the way of a YouTube channel that, like our “Norwalk Notables” column, concentrates on racers and the performance end of the hobby.

With his ability to shoot over 1,700 frames every year at Norwalk, Tony has been the catalyst for a push to getting more race coverage in the magazine. He was able to do what I used to do earlier in my career, get down on the starting line and shoot, shoot, shoot. With my role at Poncho Perfection being so different now, Tony was a very welcome addition to the team. As an added bonus, his living less than an hour from the track puts him in close contact with many of the racers who come to the Ames Performance Pontiac Nationals.

Tony is not a stranger to interviewing people. For over 20 years, he has hosted “The Metal Command” radio show, which has recently left the airwaves and has evolved into a podcast. He has a studio in his home and in this period of COVID-19 isolation, he was still able to get his first two episodes posted on the channel. The first was a montage of some action photos from Norwalk that went over extremely well. The second installment was an interview with Jaimie Zeek, a third-generation Pontiac racer who received her NHRA racing license at Norwalk in 2018. It was an inspiring story of an accomplished young woman who has become a very tough competitor in the process.

As we went to press, Tony was able to get out of his house and visit Kevin Burns, the 2019 Chief of the Pontiacs. Tony interviewed Kevin in his garage with his race-winning Firebird right next to him. It was a great conversation that has been honed by Tony’s years of radio experience. Future episodes will delve into such topics as engine building, performance upgrades and of course, more Pontiacs.

Between the Tiger Talk podcast and the Poncho Perfection YouTube channel, we are catering to the changing tastes of the 21st Century Pontiac fan. We have great people on both projects and each is different enough to not overlap the other.

Be sure to tell your friends that The Cruisin’ Tigers Pontiac Club and Poncho Perfection are continuing to branch out in new and innovative ways. The best is yet to come! 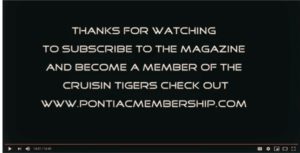