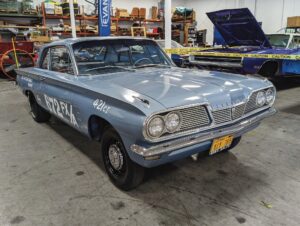 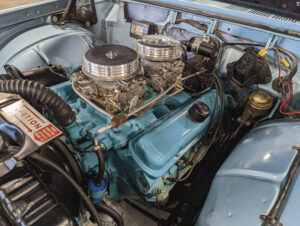 I know that it’s been nearly five years since you passed, but something so amazing happened to me recently that I have to tell you all about it anyway. Back in 2012, I saw an amazing recreation of the Mickey Thompson/Hayden Proffitt 1962 Pontiac A/FX 421 Super Duty-powered Tempest at the POCI Convention in St. Charles, Illinois. The car was so correct and authentically-prepared that there was literally no way you could tell that it wasn’t the original car. I marveled at its amazing details and had a chance to briefly speak to the owner, Mike Marsh.

The car had been completed in the early 1990s by George Knevelbaard, a prominent Super Duty collector and historian who was living in California at the time. As a teenager, he hung around at Mickey Thompson’s shop in Long Beach in the early 1960s and had first-hand experiences with Mickey himself, his employees and of course, the cars. The Tempest had a profound influence on him and after decades of collecting parts, he found the perfect car to base his recreation on and began construction in the late 1980s. After showing the car for several years, he moved to Michigan and sold the car to Marsh around 2010, so the car went back to California, this time up north in Vacaville.

Years went by and though I always considered the car to be one of those machines that was just out of reach to own financially, I never forgot about it. I moved onto other more affordable cars, like my 2000 Daytona Pace Car GTP  and my 1966 Tempest Custom four-door hardtop but I never forgot about that little blue Super Duty Tempest.
Living down here in Florida and having since sold both of my other Pontiacs (your grandson has the GTP so at least that one stayed in the family), there was a definite void in my garage that our daily driver Ford Escape was in no way capable of filling. It’s a nice little driver but let’s face it, a three-cylinder engine, turbocharged or not, is not really going to satisfy anyone’s need for speed.

Nevertheless, Ann and I pushed on with the magazines and continued to work hard. After months of searching, we even found a house that we liked in Clearwater and we were ecstatic when our offer was accepted and a closing date was set.
At the same time, one of our contributing editors, Dave Bonaskiewich, had caught up with George Knevelbaard, who now lived in Orlando. He spotted George’s 1963 Grand Prix at a local car show and shot it and George’s 1960 Tri-Power 389 Bonneville for the magazine. Both cars were cover features and George and I became phone buddies over the last several months.

After the Bonneville had become the cover feature for the February, 2022 issue, George called me to get some additional copies. During the course of our conversation, I said to him, “You know, I’m a bit of a fan of yours.” His reply was a somewhat surprised, “Really? Why is that?” I went on to explain to him that I really admired the build of his old ‘62 Tempest and relayed how I spent the better part of an hour back in 2012 looking that car over when it was on display in St. Charles.
His reply floored me. “The owner of the car is a friend of mine and I just spoke with him yesterday. It’s for sale. Are you interested?” “Yes,” I hesitantly replied, “but with a caveat. As much as I love the idea of owning that car, we are about to close on our house in the next few weeks and I don’t want to do anything to screw that up.” I added, “Once we are on the other side of that hurdle, I will reach out to you to see if it’s something I can swing.”

As it turned out, those few weeks passed quickly and after closing on the house, we found ourselves in much better financial shape than we realized. Loan managers always scare you with a high closing cost to make sure that you have enough money going in. As it turned out, the cost of the car wasn’t that much higher than what we had left over after the closing. After double-checking to make sure our numbers were correct, I texted George and let him know that we were ready to pull the trigger. He gave me Mike Marsh’s contact information and we made the deal over the phone while I was at our weekly cruise night at the Quaker Steak and Lube. I also had my friend Josiah Coy look it over and he told me that if I didn’t buy it, he would. Good enough an endorsement for me!

No one knew what I was doing besides Ann and we kept it close to the vest for several weeks afterward. I wired Mike the agreed upon amount and the title came to me, quite appropriately, on 4/21. I still think you had something to do with that!
Anyway, the car arrived on schedule a few weeks later and it came during the course of our move into the new house. We had the car delivered directly to the Iron Stable Garage in Largo. Chris Brown and his techs, Shannon Showalter and Marc Roberts have been working on the braking system, which left all of its fluid in the trailer during its journey from northern California to Florida. We expected that something would let go in the course of transport, after all it’s a sixty year old car, something was bound to happen.

Our plan was to keep the car under wraps until such time that it would make its Florida show debut at the annual Iron Stable Garage Open House. My old friend Jim Campisano would also be covering the event for his “Muscle Car Campy” YouTube channel and we even got George and his wife Kathi to come out from Orlando. It would be the first time that he had seen the car in over a decade and the first time we met in person after months of talking on the phone.

Well, as you might have guessed, Murphy’s Law came into play and partially foiled our plans. Campy tested positive for COVID after attending a wedding in New Jersey and was unable to be there for the unveiling. Fortunately, we had a “Plan B” in the form of our Executive Editor, Chris Phillip, who is a master with a microphone and handled the unveiling of the car beautifully, with our friend Dave Marquis recording the event with his trusty smartphone. After Campy recovered, we shot the episode right at The Iron Stable Garage. It turned out really well and if you didn’t know the back story, you’d never know anything was awry. https://www.youtube.com/watch?v=ldmJaYpTYUE

George told me a lot about the car that I didn’t know, like the fact that he was able to recreate the original car so faithfully because he was able to get a full set of photos taken from the feature in the September, 1962 issue of Hot Rod. Many more photos were taken than the ones that made it into the article and they provided a solid blueprint for him to follow.
I also found out that after Hayden Proffitt left the Thompson organization and opened his own shop, Lloyd Cox continued to race the car with quite a bit of success. I knew that part of the story but what I didn’t know was that Lloyd also raced the car with a modified Slim Jim automatic. Apparently, he was one of the few people out there who knew how to make them shift correctly and live. He was very successful with the car in this configuration as well.

From there, the original car was sold and converted into an altered-wheelbase funny car and while it’s purported to still exist, the most recent photos of it are over 30 years old and it’s likely too far gone to restore. It is also said to have lost its original VIN tag, making authentication next to impossible.

I gotta tell you, Dad, this car is in amazing condition, nothing like the salt-encrusted Rochester rotboxes we used to drag home whwhen we were growing up. It’s Yorktown Blue, just like your old ‘62 Catalina sedan was and it looks nearly new on the outside, inside and underneath—even the engine compartment is fully-detailed and in show condition. And that engine! It’s a real 421 Super Duty with the early 306 heads, the Thompson version of the standard dual quad intake, the correct Carter AFB carbs, a McKellar #11 cam and custom headers designed specifically for the swap. I’m not sure what the compression ratio is, it’s certainly over 11.5:1 and you can hear every power stroke when it idles. The exhaust note is otherworldly and Mike Marsh told me how much fun he had taking it to cruise nights with the headers uncorked and setting off all the car alarms as he idled through the parking lots. I hope to try that out myself at some point.

The 421 SD is backed by a Borg-Warner T-85 three-speed manual transmission and is controlled by an original Drag-Fast 7000 shifter, which Thompson preferred over the Hurst units of the period. It’s very heavy-duty and is extremely precise. A four-speed was not considered for the job, as Proffitt preferred shifting twice rather than three times. The T-85 was also stronger than the four-speeds available at the time. From there, the power is transferred to a 1957 Pontiac rearend with 4.30 gears, Safe-T-Track and Summers Brothers axles. It’s essentially a bulletproof driveline and that rearend looks like it came out of a dump truck, compared to the little car its now sitting under. It won’t be a very practical street car, with the need for super high-octane fuel and the 4.30 gears will ensure a steady four to five mpg. It’s a good thing we are less than ten minutes from the local cruise night location.

While the deal was going together, I spoke with my brother and your namesake, Charles, about the car and how I wished that you were still around to see it and take it for a spin. I told him, “Yeah, Dad loved the old Super Duty cars and he would have gotten a real kick out this one in particular, it’s a perfect tribute to the original, the car that won the 1962 Winternationals and started the A/FX and funny car wars of the 1960s.” Charles agreed and said, “You know he already knows what’s going on and he probably had a hand in it coming together.” I think that he was completely right about that, wasn’t he?
As for the rest of the family updates, everyone is good. Mom’s doing great and Alex is 12 now and taller than Mom. Rob’s 26, he has a great job with a local tent and event company and getting more like you by the day. Katie’s still living in Brooklyn and her jewelry business has taken off like no one could believe.

Life is good, Annie and I are happy and healthy. The new house is perfect for us and we have two dogs now, who keep us entertained. After 34 years in the business, we finally have a lifestyle that matches the amount of effort we have put into our careers. You can rest easy, everything worked out exactly like it should have and we all know that you had a huge hand in making it all happen. That’s about it for now. We miss and love you. Say hi to Mac for us…